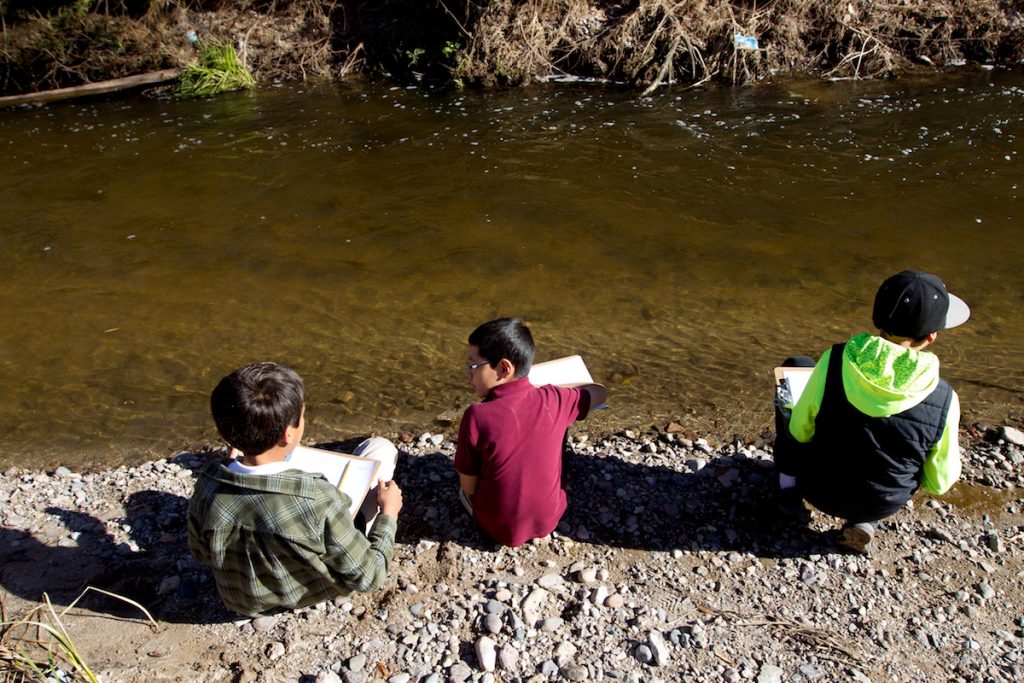 From the Sonoran Institute Blog

The sun is just rising through their school bus windows, but these fourth graders aren’t going to school. Instead, they are doing something some of them have never done before; they’re taking a trip outside their city of Mexicali, the capital city of the Mexican state of Baja California. The bus windows are clouded by the ever-present desert dust, industrial smog, and smoke from burning trash that chokes their air. They make slow progress through traffic that takes them past block after block of pavement and concrete but by very few parks or other greenery. It is hot and exceedingly dry. The rare waterbodies they see are agricultural drains lined with dirty, standing water and debris. As they leave the city limits, space opens up to agriculture fields but no real natural areas. Many of the open areas along the way that are not being cultivated with food are growing mounds of old tires, garbage, and other illegally dumped trash. Eventually, the bus begins to follow a canal that runs parallel to a mostly dry riverbed. The canal is transporting water diverted from the Colorado River. The mostly dry riverbed is the Colorado River. But the kids don’t know that—yet.

Finally, about an hour outside the heat and hardscape, the bus comes to a stop. The door opens, and—like magic—the children step straight into a thick, shady forest. With animals. And bugs. And water.

“They’re actually a little scared,” says Gabriela González-Olimón, environmental education coordinator for our Colorado River Delta program. “They feel like they’re in a jungle. Many have never been in a place like this. Even some of the teachers can’t believe this really exists near Mexicali.” 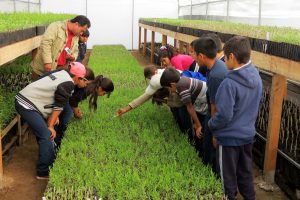 The students have arrived at our Laguna Grande Restoration Area in the Mexicali Valley. Sonoran Institute-led efforts beginning in 2007 to plant and nurture native cottonwood, mesquite, and willow trees have transformed this area into the largest (nearly five river miles) and most-dense stand of native riparian habitat along the Colorado River in Mexico. It is one of the few green open spaces in the region, and one of the only places to see flowing water in the Mexican stretch of the Colorado River.

Bringing students to the site is one component of our expanding focus on educating and engaging young people in environmental conservation. In addition to programs in the Colorado River Delta, we also sponsor educational programs about the Santa Cruz River in Arizona.

“Our belief is you can’t care about what you don’t know,” says González-Olimón. “So many children in Mexicali don’t have the opportunity to get out of the city and experience nature. Most of them don’t know where their water comes from. Our program allows them to see first-hand a river they thought was long gone. They can see for themselves all the life that water in the river makes possible. For our work to have long-term success, we have to connect the new generation to the river, as we will need them to be champions for this work.”

Guides take groups ranging from kindergarten through university students into the forest. For nearly three hours, they follow bobcat and coyote tracks, identify bugs and plants, spot migratory birds, and see beavers and other wildlife they would otherwise never encounter. Since 2015, over 4,000 people have visited the site, including more than 30 school groups (about 1,200 students) in 2016, during the first year of our fieldtrip program. Numbers are expected to keep increasing as word of the program and its value spreads. “Living the experience is the most effective way for my students to learn about ecosystem problems and, specifically, the river,” says Edna, a high school teacher visiting with her class from Mexicali. “The Sonoran Institute’s programs also help me get trained and updated in subjects related to the environment we live in.”

Outside of the school programs, our Family Saturday programs provide an opportunity for people of all ages to visit the restoration site for a free guided tour, birdwatching, kayaking, and a chance to see the river that most thought had disappeared with their grandparents’ generation.

“The reactions are incredible,” says Dzoara Rubio, our environmental education assistant. “For the older people, it’s mostly tears when they see the river and the forest—things they’ve heard stories about from their parents and grandparents and are now able to experience with their own families. Seeing the river alive again generates very powerful emotions in the people of Mexicali. It’s waking up memories that connect them with past generations, with their heritage. They instantly care about the river because it’s part of them. So, in addition to our successful ecological restoration, this cultural identity is another dimension of what the Sonoran Institute is rescuing in the Delta.”