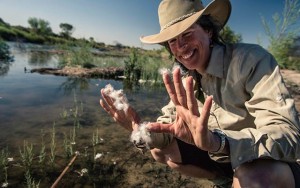 By Eloise Kendy, Freshwater Scientist for The Nature Conservancy

Three years ago, an innovative agreement between the United States and Mexico ushered in a new era in international water management. Called Minute 319, the agreement authorized a broad array of actions in both the United States and Mexico. Among them was the recognition of the value of nature and the restoration of the parched Colorado River Delta through timed releases of water (called pulse and base flows) from upstream dams.

Once an ecological treasure, the Delta is now a a dry, desolate river channel flanked by weed-choked floodplains and irrigated farmland. Fifteen years ago, conservation visionaries resolved to restore the channel and its floodplains to the critical wildlife migration corridor that it once was. Minute 319 initiated a full-scale feasibility test of that vision.

By all accounts, Minute 319’s environmental provisions have been a success. In 2014, a pulse of water surged into the Colorado River Delta, rewetting the river corridor all the way to the Gulf of California for the first time in decades.

Residents of the Mexicali Valley flocked to the newly flowing river. Surveys revealed overwhelmingly positive responses from the local people, many of whom saw water in their river for the first time in their lives. The river flowed steadily for nearly two months.

This year, when another small pulse flow was released, local farmers reacted differently than ever before. Previously, they viewed any water in the river as wasted because it couldn’t be used to irrigate crops. This time, they welcomed the water as a sign of ecological rejuvenation in harmony, not in competition, with their livelihoods. Some of the project’s harshest critics have become supporters, having recognized that what is good for the river is also good for local communities

In places where conditions are right, riparian restoration is exceeding expectations. Native willow and cottonwood trees that germinated during the 2014 pulse flow and subsequently received nourishing “base flows” now exceed 2 meters in height. The restoration areas, where tree canopies shade moist, cool soils teeming with new life, present a stark contrast with the hot, dusty desert that they replaced. River birds such as Abert´s Towhee, ash-throated flycatcher, common yellowthroat, Gila woodpecker, yellow-breasted chat, and song sparrow returned, displacing the farm birds that had previously nudged them out. It seems that with short-term care and long-term water, the Delta could indeed revive.

Minute 319 launched a five-year experiment that ends in 2017. However, prospects for a successor agreement are good. Formal negotiations kicked off last May. U.S. Department of Interior officials have expressed the desire to achieve a new agreement by the end of 2016. U.S. and Mexican negotiators are committed to a strong environmental component, which means more fresh water for the Delta.

The main negotiators have established working groups to guide them, which in turn are relying on the findings of the binational Minute 319 science team, which the University of Arizona, Sonoran Institute, and The Nature Conservancy co-lead. The team’s monitoring program represents a substantial investment in learning how water moves through the built and natural systems that feed the Delta. The lessons we have learned from Minute 319 are already informing plans to more effectively deliver water in the future.

As a member of the science team and the Delta Water Trust, which acquired a share of the water for restoration, I feel optimistic about the negotiations. I can clearly see the pathway to a future in which a landscape-scale network of thriving conservation sites sustains native biodiversity and local people in the Colorado River Delta. As a member of the Environmental Working Group informing the negotiations, I look forward to applying the lessons from Minute 319 to an even better successor agreement that is strongly supported by both Mexico and the United States.