Why is our replanting project so vital? 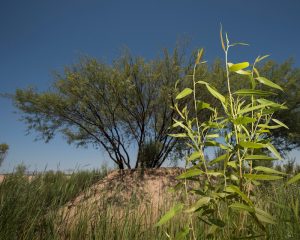 The absence of water in the Colorado River Delta has put the natural cycles of planting and growth at a disadvantage. During times when water was a constant presence, cottonwoods and willows would produce and disperse their seeds along the banks of the Colorado River Delta region beginning in March and extending through June. This coincides with the historic annual spring flooding events of the Colorado River. The seeds scatter through the air and flow along the streams, trying to reach open and wet spaces along the banks of the river. Their ability to germinate and take root depends upon the ideal conditions of salinity and humidity of the soil, together with a consistent level of shallow groundwater in order to sustain the survival of the trees through the hot summer months.

Migrating Bird Cycles in the Delta 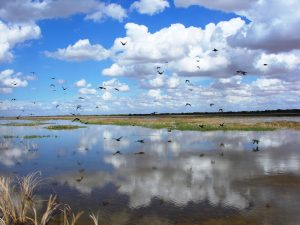 and water birds. Early in spring, the birds that spend the winter in the delta begin to depart to their breeding grounds in the northern part of the continent. Later in April and May, the delta receives an influx of millions of birds that spend the winter in Southern Mexico and Central America during their northern migration back up into the U.S. and Canada to breed.

Species of Migrating Birds in the Delta

Among the migrating birds commonly found in the Colorado River Delta, each spring are 26 species of waterfowl, 32 species of shorebirds and 68 species of land birds. Good habitat quality of these Delta-region stopover sites has been linked to an improved survival and breeding success of these bird species, and overall with their conservation at a continental scale. This is an important part of the restoration goals for the Colorado River Delta. #RaisetheRiver

Seasons of the Marsh Birds 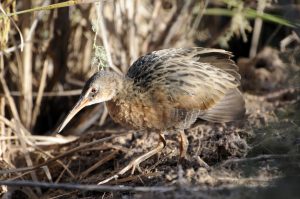 The Colorado River Delta is home to several protected marsh birds, including the Yuma Clapper Rail, the California Black Rail and the Virginia Rail. Their breeding season peaks between March and May, when these birds vocalize frequently to attract a mate and defend territories. By June, most of the eggs have hatched, and the chicks follow their parents through the marsh, looking for food and avoiding predators.

Marsh Birds of the Delta: The Yuma Clapper Rails

In general, marsh birds are very shy, and are rarely seen, choosing to stay in the cover of the cattails and other vegetation of the Colorado River Delta. The on-the-ground bi-national scientists of the #RaiseTheRiver coalition monitor their populations, counting the birds by their calls. Through these monitoring efforts, we have learned that the Ciénega de Santa Clara in the Delta is home to approximately 75% of the total population of Yuma Clapper Rails.

Riparian Birds in the Delta

The forests of cottonwoods and willows in the Colorado River Delta provide an optimal breeding habitat for over 30 species of riparian nesting birds. Most of these species, including the Blue Grosbeak, Western Kingbirds and Yellow-billed Cuckoos, migrate south during winter and arrive in the Delta between April and June.  Other species are year-round residents, such as the Abert’s Towhee and the Crissal Thrasher.

While each season has its activities and events, the month of May is a truly spectacular time to see how restoration is bringing back life to the Colorado River Delta.